Marcus Mosiah Garvey, regarded as a profit in Jamaica said: "Look to Africa when a King and Queen are crowned to know that your hour of redemption is at hand" in a script he wrote in back in the 1920s. Many thought it was a prophecy even though there were mixed interpretations amongst his followers. 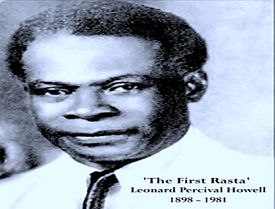 Father Of The Rastafari Movement

Apparently, It was Leonard Howell who attached spiritual significance to his interpretation of Garvey's words based on his personal religious belief in the divinity of Emperor Haile Selassie. Howell viewed the religious establishment portrayal of Christ as misguiding and did not reflect the kingly character described in the Bible.

From Howell's interpretation of the scriptures, there was only one man on earth befitting of that majestic title, and he was from Africa, so the concept of Rastafari was derived based on the divinity and kingly character of His Imperial Majesty Emperor Haile Selassie of Ethiopia.

Howell was seen as a treat to the religious establishment in Jamaica for openly proclaiming Haile Selassie as God, so the government pursued and eventually imprisoned him on trumped up charges of treason, but that did not changed his spiritual belief.

The Concept of Rastafari remains the same, but knowledge is always increasing, and people are becoming more enlightened every day and questioning the ostensible divinity of Haile Selassie and other proclamations of Rastafari.