History Of The Zulu

Shaka Zulu the great african warrior and military sratagiest who assumed the throne of the Zulu kingdom. After he organized the zulu into a military clan, he then forged them into a force unchallenged in Southern African kingdoms. 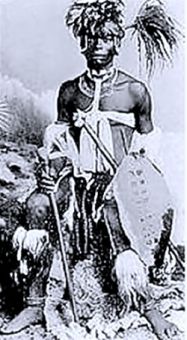 Through a brief overview of Zulu history and traditions, this article, committed to reevaluating traditional Zulu social patterns, questions the European interpretations of Zulu people's system of beliefs and religious and spiritual concepts. From an Afrocentric critical reading of major works by three European authors (Callaway, Hexham, and Berglund), this study is an attempt to trace the spiritual African heritage of the Zulus back to the ancient Kemetic concepts.

Rather than insisting on the attribution of Christian and Muslin traditions to the Southern African indigenous peoples, this article aims at showing the inconsistency of such attributions vis-à-vis the human being's responsibility that underlies the holistic cosmogony of every African.

As far as the European recognition is concerned, the last glorious achievement of the Zulu army was the battle of Isandhlawana on January 22, 1879, where the Zulu, armed with spears and clubs, wiped out an entire British regiment, rendering their cannons and guns useless against Zulu's war strategy of swift surprise attacks.

Notwithstanding, the perverse effect of the glorious performance of Zulu's intelligence, strength, and military organization determined a reinforcement of the British weaponry and recrudescent military opposition until Ulundi, the Zulu capital, was burned down on July 4, 1897, and the Zululand came under direct British ruling.

Very much from this British military failure and because pre-19th-century Zulu history could not for a long time be traced by written records other than the ones established after 1824 by the reports of the European settlers in Natal, the Zulu peoples have gained their reputation as ruthless warriors, as well as a people with no religion.

On the Zulu side, however, the need for survival to the preconceived ideas of the European missionaries and traders and to the colonialism of the European powers made them tenaciously defend their cultural heritage, and their former pride and political position in South Africa have been regained in the 20th century under Buthelezi.

Nowadays, the largest Zulu population can still be found in the region of KwaZulu on the eastern coast of Africa, but many live in the cities of urban South Africa where, according to an estimate, approximately 8 million South Africans considered themselves Zulu or members of closely related ethnic groups in the 1990s.

As historical sources put it, the African peoples who settled in subequatorial Eastern and Southern Africa descend from two the Khoi-San, hunters and cattle raisers, ochre-skinned races descendent of Early Stone Age progenitors, who lived all over Southern Africa; and the Bantu, a term derived from the Zulu collective noun for ''people'' of Black races who lived in the Great Lakes region of subequatorial Central-to-East Africa.

Bigger, stronger, more aggressive, and technologically more advanced, they displaced those of Khoi-San origin when a growing population required more land. The Bantu-speaking people were divided into two broad groups: Nguni-speaking people who are the Zulu ancestors, and speakers of other African languages.

The Nguni people are named after the charismatic figure who is said to have led a migration from Egypt to the Great Lakes via the Red Sea corridor and Ethiopia and settled in the mystical Embo. At that time, there was not even a clan called Zulu among those who made up the Nguni people but their wealth was measured in cattle, a tradition that continued throughout the modern Zulu Kingdom. Most of the speakers of other languages, such as Sotho, Tswana, Tsonga, and Venda, lived in the interior of the country.